Do smugglers do any good by providing an escape route?

The good versus the bad.

Are people who traffic migrants and refugees across dangerous waters, for profit,  doing something totally unacceptable?

According to UN figures I’ve gleaned from The Guardian this week,  some 200.000 people crossed the Mediterranean in the month of October, paying smugglers to take them across dangerous waters. That’s right, 200.000 in one month. Compare this with roughly the  same figure for the whole of last year.

Now look at this figure: of those who attempted the perilous crossing, some 3.490 have drowned so far this year.

Do we condemn smugglers for making a profit from the need of migrants to flee danger or do we condemn bureaucracy for not meeting this need? Or the people who take their families onto such treacherous waters?

” No one leaves home unless home is the jaws of a shark.

And you have to understand no one takes their children onto water unless the water is safer than the land.”

I’ve occasionally bought books and found the bags they come in have something  witty to say. Below are a few – from bookshops in Dublin, Oxford, Johannesburg and New York. They’ve been stuck up on my kitchen  wall for quite a while – which will explain some of the crinkles. 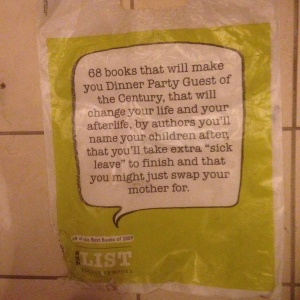 This reads: Some books are deservedly forgotten; none are undeservedly remembered.

A heartfelt one: “Poetry is living proof that rhyme doesn’t pay.” This was from a bookshop in Johannesburg.

and this is the back of that bookshop bag from JoBurg – Exclusive Books.

And then there’s  this bookshop in New York – with  its baseball cap message:

And finally, my favourite:

Hallow E’en: I pull on my most fearsome mask and frighten the shit out of them

Hallow E’en for grown-ups. A guide.

A woman came into my London coffee shop the other day, dressed in a long, ragged black dress and carrying a broomstick. Let’s not get picky about dates but ask people when Hallow E’en is and most will have to stop and think. Not so in Ireland where it all began. Why, in my boarding school, we actually got a whole day off school for it. Samhain, it’s called, in Irish, meaning festival or gathering. It’s also the Irish word for the month of November.

But let’s be clear about this. Samhain is a glorious pagan feast, a three-day blinder which marked the beginning of winter, when the boundaries between the living and the dead, between this world and the other were blurred, when ancestors were honoured and blackguards cursed, when people met to bawl out songs and jump over bonfires, when the portals to the fairy world were open to any and everyone and much fun was had.

And now look at it: a shameful commercial display of shop windows that get it all wrong. Windows full of ghoulish masks, devils’ pitchforks  and terrifying witches, all colour-coded orange and black – wherever that came from.

But people, check it out. In the land of the Celt, the underworld is a place of subterfuge, laughter and excess. Good things come forth from the earth. And no, women are not witches. True, we may appear unknowable. After all, subverting the hierarchy is the name of the game. But fearsome ugly creatures intent on frightening little children? Never. Unless, of course, they come to my door on Hallow E’en, shaking their good cause collecting box at me, at which point I pull on my most fearsome mask and frighten the shit out of them. On Hallow E’en, you get apples and nuts and that’s it. Or possibly a slice of barmbreac – the  traditional fruit bread wherein is hidden a Poundstore wedding ring which foretells an up and coming romance.

And another thing: in Ireland, we used to spend a good week carving a candle lamp out of a turnip or swede as we call them. Now, what do you get?No, I won’t mention the aborted baby turnips. Instead, we get large alien pumpkins. Precarved.

The rot set in round about the 8th century when those men in frocks – OK, popes and bishops – decided to take over Samhain. November is the month of the dead, they declared. So, in the Christian calendar we have November 1 dedicated to virgins and martyrs and those holier than you and I and which is called All Saints or All Hallows. Then we have November 2 dedicated to a lower class of dead – All Souls.  But before all that, we have the last vestige of paganism: the eve of All Hallows or, bingo, Hallow E’en.

And because women were feared by the men in frocks, they were demonised just as, much earlier Medea, demonised by Euripides, was characterised as a witch who administered a mind-altering drug to Jason when in fact she was a healer. And now, only a few weeks ago, the Prime Minister of Australia was demonised by that most unreconstructed of elected representatives, Tony Abbott who, garlanded with posters, urged Australians to Ditch the Witch. Bitch-witch, what does it matter so long as the flames of hell consume her?  And yep, those old flames were there on the posters.

So what is Hallow E’en really about? Pubs and clubs think  it’s about getting as many young people onto their premises and as drunk as possible so that they stumble about the streets  half cut, dressed as nuns with their boobs hanging out. Teens think it’s about frightening old men by letting off bangers as they totter across the street on their zimmer frames and small children think it’s about money and sweets.

It’s none of these. Pagans of the world, cast aside your fear of the unknown. Get down and dirty in the underworld. Become an honorary Celt and celebrate the moon, the night, the dark. Raise a glass to your ancestors. Make love with abandon. Write poetry. Subvert those set above you – your elected representative, your boss, your bishop. October 31st is yours, for one night only.

A little bit of literary gossip (2)

A little bit of literary gossip (2)

Some years ago, I picked up, in a secondhand bookshop in Dublin, Richard Branson’s autobiography. It was only when I got it home that I found he had written in it, thanking the recipient for all his help. I later gave it to my son but still wonder how it had found its way into a secondhand bookshop in Dublin. Did the recipient lose it in a house move, throw it away, maybe gave it to someone? I’m still working on that one.

Then, round about the same time, I stumbled on a book by writer John Wain, called The Travelling Woman. Being a travel writer, I found the title intriguing and bought it. The following week, I found another Wain book, The Contenders.

I knew John when he was Professor of Poetry at Oxford – and both before and after when he wasn’t Professor of Poetry. His novel, Hurry On Down, had been a great success and together with Ian and  myself, John and his Welsh wife, Eirian, had some good times but often paid the price next morning. Our children, theirs and ours – there were three Wain boys – were more or less the same age and no doubt felt an affinity towards each other since both lots had problem writers as parents. Or maybe that should read simply problem parents.

In my secondhand copy of The Contenders is a dedication which reads: “Mary’s other copy. 1962. Love between the covers.” And at the bottom of the page is written:

It’s an interesting dedication since, in 1962, John had been married to Eirian for two years.

The Contenders lives on my bookshelf beside yet another book by John, this time a collection of his poems called Open Country. When he visited us in Brill, in Buckinghamshire, I asked him to write in my copy. Here’s what he wrote:  “Mary’s copy. All good wishes John 1987 at Brill.” Divided by 25 years, the thin, sparse handwriting is the same in both books.  To two Marys, one I know and one I don’t know. Did John have an affair with the mysterious Mary in 1962? Who was she and how did the copy end up in a secondhand bookshop in Dublin?

John later wandered from the marriage bed and round about that time, Eirian came to a party in my house and went through my bookshelves turning all John’s books to the wall. It had the feeling of a curse.

He subsequently returned to the marital home and having a drink with him in the King’s Arms in Oxford, I asked him why he had gone back. “I couldn’t bear to see Eirian so unhappy,” he said. And he had made her unhappy. That I knew because she’d told me.

Eirian died in 1988 and the following year, John remarried.

“You know,” he replied, “I can spend a whole morning trying to decide will I go to London by train or by bus but I took only a minute to decide to get married again.”

In my copy of Open Country, he also made one or two annotations. “Silly mistake corrected by author JW) he wrote. He knew, by doing so, he was adding to the value of the book. But I won’t be selling, not even to an American University.